In chemistry, a periodic table is a listing of elements in rows, ordered by their atomic weights, ordered in the intervals in which their properties repeat periodically.

History
In circa 1770-1789, French chemist Antoine Lavoisier an list of about 33 elements and or chemical entities, distinguishing between metals and non-metals. [5]

In 1800, a total of 28 elements where known to exist; the following shows their retrospect placement on a modern periodic table: [6]

In 1818, Swedish chemist Jacob Berzelius had determined the atomic weights of forty-five of the 49 accepted elements.

In 1828, Berzelius developed a table of atomic weights and introduced letters to symbolize elements. [5]

In 1829, Johann Dobereiner conceived of his “triads” or groups of three system to organize elements with similar properties, the forerunner to the notion of “groups”: [5]

In 1858, as summarized by English chemist John Bidlake, there were 65 known elements, divided into two groups:

(a) Non-metallic elements (metalloids): comprised of thirteen substances.
(b) Metals: fifty two bodies which are known as metals; several of which are of very recent discovery, and their propterties are as yet very imperfectly understood.

In 1863, English chemist John Newlands began to investigate atomic relationships among the elements, especially in bromine, chlorine, and iodine series. [5]

In 1864, Newlands arranged about 60 known elements in order of atomic weights and observed similarities between the first and ninth elements, the second and tenth elements etc.; he proposed the 'law of octaves'. This was the forerunner to the notion of “periods”. [5] The following is an 1866 version of Newlands periodic table: (Ѻ)

In 1869, Lothar Meyer compiled a periodic table of 56 elements based on the periodicity of properties such as molar volume when arranged in order of atomic weight; shown below: [5] 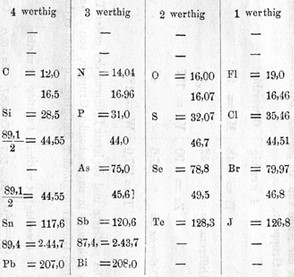 In 1869, independent of Meyer, Russian chemist Dmitri Mendeleyev arranged the 66 known elements of his day into a periodic table, shown above (left), entitled “The Experience of the System of Elements: Based on Atomic Weights and their Chemical Similarity”, which as he later famously recalled: [2]

Mendeleev’s table based on atomic weights but arranged 'periodically' with elements with similar properties under each other. Gaps were left for elements that were unknown at that time and their properties predicted (the elements were gallium, scandium and germanium). The order of elements was re-arranged if their properties dictated it, e.g., tellurium is heavier than iodine but comes before it in the periodic table. Mendeleyev's table was important because it enabled the properties of elements to be "predicted" by means of the "periodic law", namely that properties of the elements vary with their atomic weights.

In 1875, Scottish physicists Balfour Stewart and Peter Tait, in their chapter on the development of chemicals, planets, and life, were stating that there were 64 known elements. [7]

Animated systems | Biological elements
In 1910, about 81 elements were known, and it was in this year that American physician George Carey famous stated, in a rather prophetic manner, that:

"Man's body is a chemical formula in operation".

In modern times, 118 elements have been discovered, only 92 of which occur naturally, and only 26± of which have been found to have function in the human or rather human molecule (formula first calculated in 2000 by Robert Sterner and James Elser).

In 1996, Portuguese chemist J.J.R. Frausto da Silva and English chemist Robert Williams, in their The Natural Selection of the Chemical Elements: the Environment and Life's Chemistry, made a periodic table showing elements known to be believed to be essential for bacteria, plants or animals.

In 2001 version of their table, termed a "biological elements period table", is shown adjacent, captioned as the “distribution of elements essential for life in the periodic table”, which lists thirty total elements, 11 bulk elements, 14 trace elements, and 7 possibly essential trace: [3] 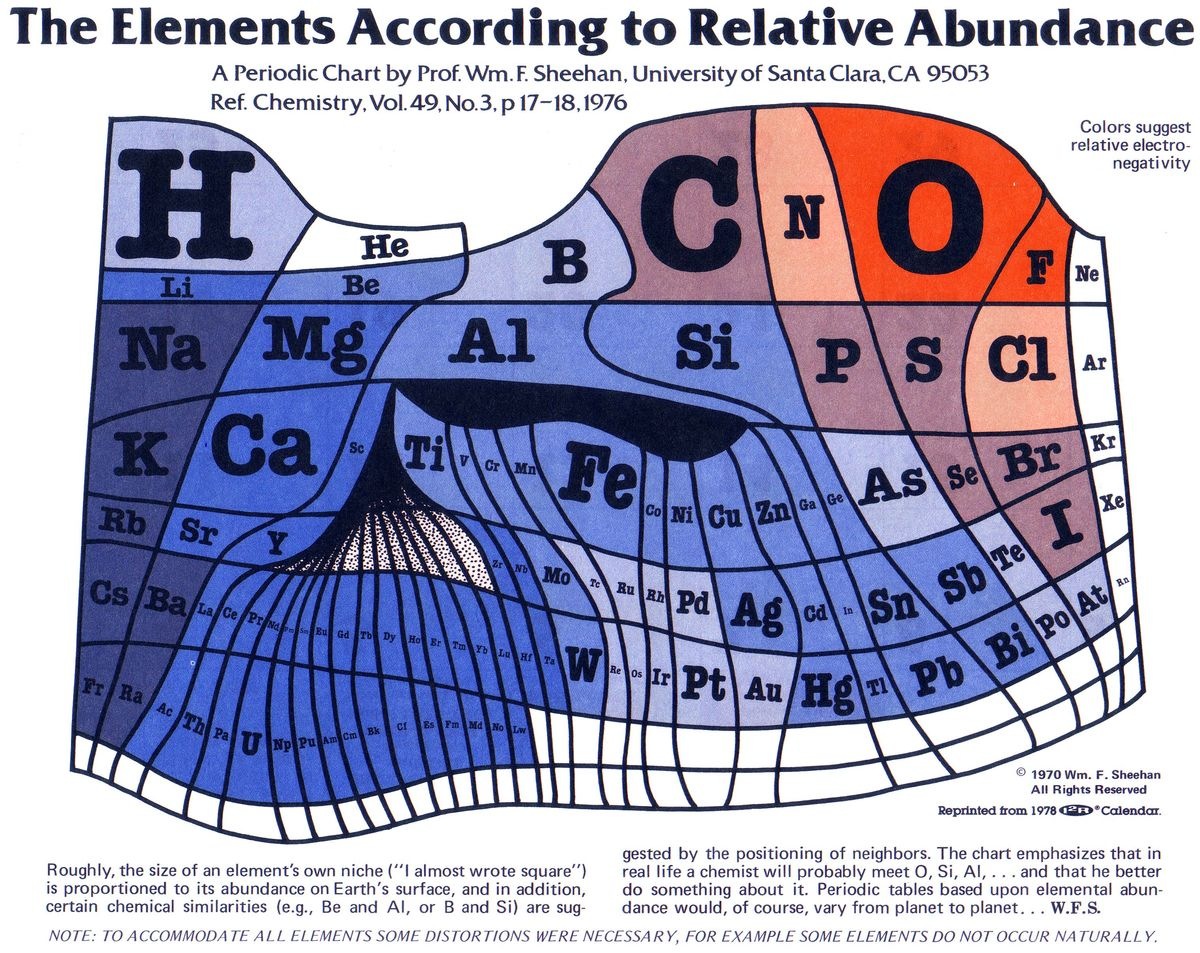 In 2013, Libb Thims made (Ѻ) an “abundance” version of the hmolscience periodic table; thematically similar to the above Sheenan periodic table.