Carey
In 1858, American sociologist Henry Carey introduced the concept of social gravitation, namely the existence of a hypothetical force of attraction, similar to the gravitational force, existing between aggregates of people, i.e. cities, proportional to the number of people in each aggregate and inversely proportional to the distance between the aggregate; to quote a noted selection:

“The great law of molecular gravitation: man tends of necessity to gravitate toward his fellow man. Gravitation is here, as everywhere else in the material world, in the direct ratio of the mass and in the inverse one of the distance. The greater the number collected in a given space, the greater is the attractive force there exerted, as is seen to have been the case with the great cities of the ancient world, Niniveh and Babylon, Athens and Rome, and is now seen in regard to Paris and London, Vienna and Naples, Philadelphia, New York, and Boston.”

Stewart
In the late 1930s, American physicist John Q. Stewart was ruminating on how to study social aggregation as a force proportional to mass inversely proportional to distance of separation phenomena, in the sense of Lagrange-Newton potential models. The following is a retrospect summary of these thoughts from Stewart’s 1947 “Distribution and Equilibrium of Population” article: [6]

“The evident tendency of people to congregate in larger and larger cities represents an attraction of people for people that turns out to have a mathematical as well as merely verbal resemblance to Newton’s law of gravitation. Lagrange in 1773 found that where the attraction of several planets at once was under consideration, a new mathematical coefficient, not used by Newton, simplified the calculations. This coefficient amounted to a measure of the gravitational influence of a planet of mass m at a distance d, and it was as simple as possible, merely m/d.”

Stewart, in short, was ruminating on some type of social potential equation of the following form:

where Ps is sociological potential felt in the vicinity of a given social mass Ms in a given distance d from that mass.

In 1939, Stewart, supposedly either aware or unaware, at that point, of the earlier social gravitation work by Henry Carey (though by 1953 he was for sure), began to use a potential equation of the following form—notation use according to English geographer Rich David (Potential Models in Human Geography, 1980):

where vi is the "population potential" at location i, in respect to a given population at location j, Pj is the size of the population at j, and Dij is the distance between locations i and j. Stewart's population potential equation states that population influence of location j on location i is proportional to the size of the population at j doing the influencing, and inversely proportional to the distance between the two locations. [2] Stewart's equation, supposedly, is based, in some way, on either the concept of universal law of gravitation (Newton, 1686) or “potential” (Leibnitz, 1773), or its synonym gravitational potential. [3]

In Dec 1939, Stewart, during his Christmas Holiday break, first applied this potential equation to the geographical distribution of what he referred to as the “Princeton Family,” that is, the 20,438 members listed in the 1940 edition of Princeton University’s Alumni Directory. Specifically, Stewart, with the assistance of a Philip Wilkie, calculated the population potential of every state in relation to New Jersey, Princeton’s home state. From that he worked out the expected number of Princeton alumni for every state, and compared that number to the actual count from the Alumni Directory. Stewart found that expected and actual numbers of alumni “more or less” lined up. It showed him that potential models applied not only to objects in the heavens but also to those down on earth within the social field. [4] Stewart, in other words, found that people graduating from a given university have the "potential" to migrate outward in radius to new cities, cities being akin to a clustering of several planets, wherein the "Stewart potential" represents the social gravitational attraction towards each outward location.

In 1947, Stewart then calculating total population potential for the US, in 1940, as a whole, via the following equation: 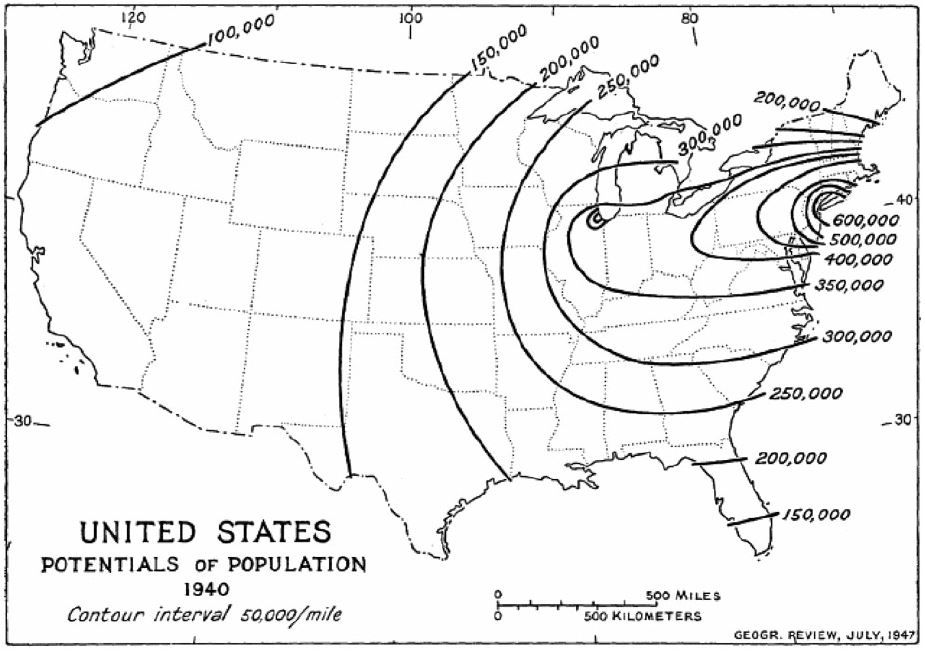 Somewhere in this "isopleth" map argument, Stewart, to note, devotes a small section to what he calls "demographic energy" or "energy of interchange", arguing along the lines that just as in physics, the potential is the energy in the field of a unit of mass, so to is the population potential the "demographic energy" in the social field around a given unit mass of population. 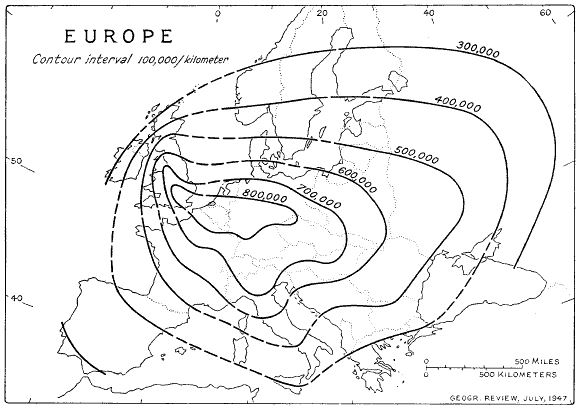 Stewart then gave US isopleths as the changed over a century: 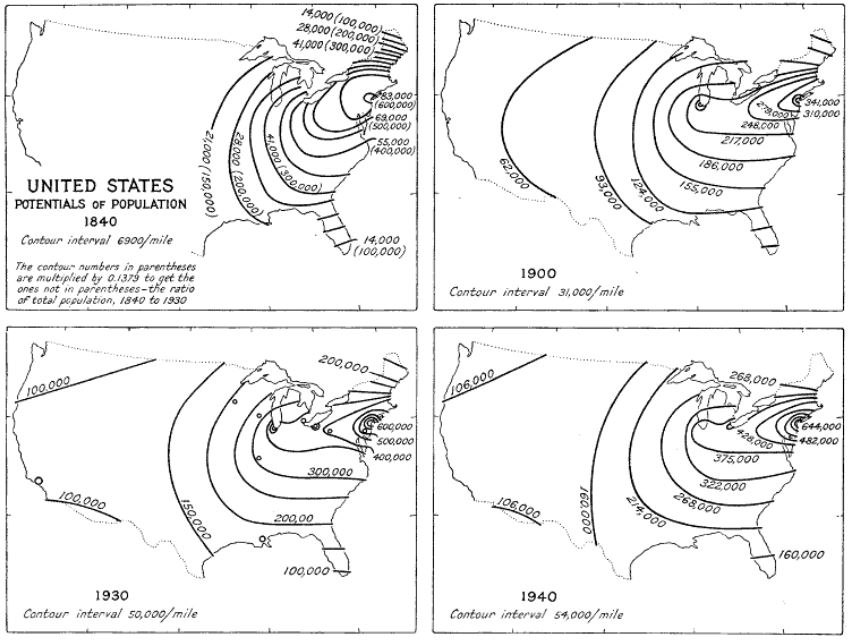 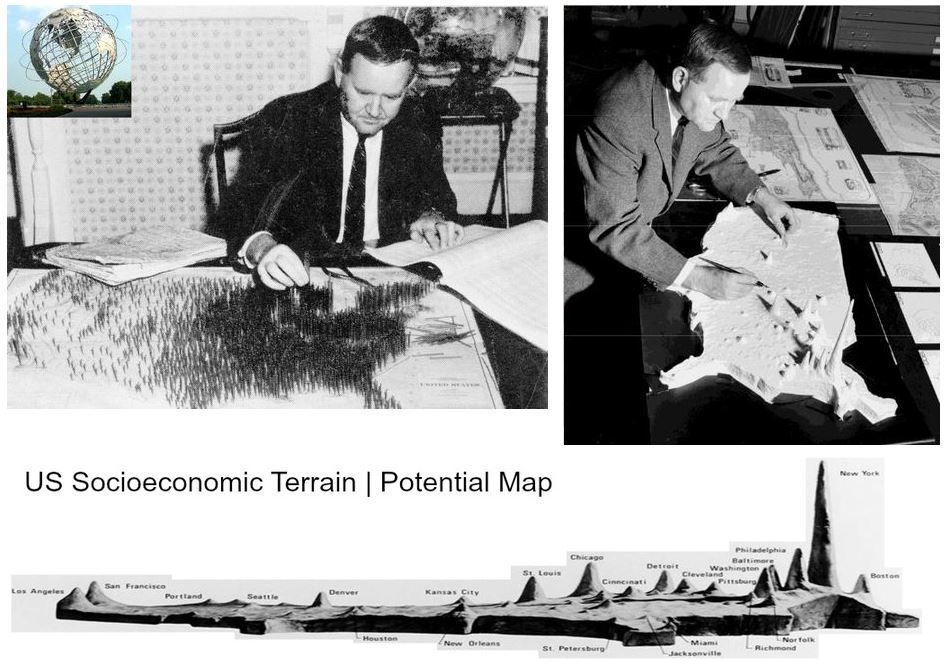 Warntz then made the following American and Canada isopleth map: 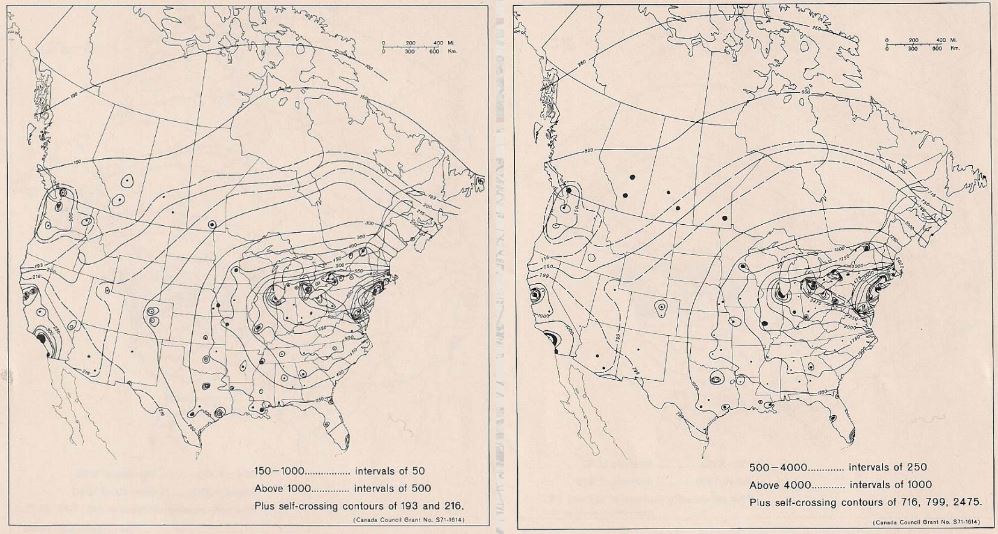