In terminology, prayer (TR:15) is a supernatural mechanism according to which one puts their hands together and or hands to head, bows their head in reverence, and talks out in their mind or vocally to a deity for help or a wish to remedy some maelstrom.

Overview
In 1758, Goethe, at the age 9, built his own alter to nature out of his father’s natural history collection, surmounting it with sulfur, lit with a candle, when making his devotions.

In 1771, Joseph Derby painted his depiction (Ѻ) of an alchemist discovering phosphorus and then “prays” for the successful conclusion of this operation, as was the custom of the ancient chymical astrologers in this period.

In 1936, Albert Einstein sent the following response letter to a sixth grade Sunday School student who ask whether or not scientists pray: [2]

“Everything is determined … by forces over which we have no control. It is determined for the insect as well as the star. Human beings, vegetables, or cosmic dust—we all dance to a mysterious tune, intoned in the distance by an invisible piper.”

In short, "praying" for something that is already determined, is illogical, i.e. a pointless endeavor.

Prayer shamming | Mass shootings
In 2015, in the wake of the 2 Dec San Bernardino terrorist attack, where 15 people were killed (quelled) reporters took notice of the tweet phenomenon of so-called “prayer shamming” used predominately by the republican presidential candidates, e.g. “our prayers go out to you”, etc., as compared to the democratic candidates, who referred to it more along the lines of a situation in need of fixing, i.e. a mechanism gone wrong and in need of repair:

“There’s a clear claim being made here, and one with an edge: Democrats care about doing something and taking action while Republicans waste time offering meaningless prayers. These two reactions, policy-making and praying, are portrayed as mutually exclusive, coming from totally contrasting worldviews.”

Examples of which are shown below: [3] 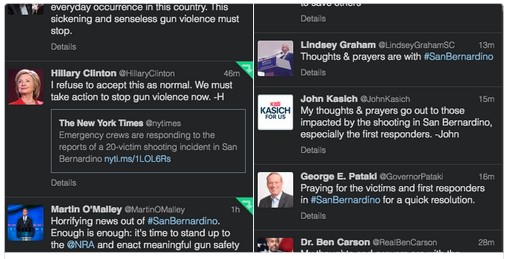 Here, we ruminate humorously how, historically, "prayer" and "incantations" were long ago driven out of professions, such as chemistry or medicine, i.e. no one trusts a doctor who tells you he or she is going to pray for you or a chemist who tells you they will pray for your new billion dollar invested chemical synthesis to turn out right, we see that prayer is a utility staple in the modern arena of politics. The following, likewise, the 3 Dec 2015 cover of the New York Daily News, shows more examples of prayer shamming:

Moreover, while democrats are not a eager to use prayer shamming, they're solution of stricter gun controls is, for the most part, no better a solution then prayer, i.e. the root of the mechanism disruption is an "education" problem, not a "gun-control" problem, namely it is not criminals who are sneaking through holes in loose gun laws and committing mass acts of terrorism, but rather highly intelligent faith-driven individuals, who believe what they are doing is righteous and good, i.e. the underpinnings of the global ethics system is dysfunctional, likely as it was at the time period when Lucretius wrote his On the Nature of Things (55BC) when city-state ethics were switching to empire ethics.

Heart | Prayer studies
Research, funded ironically by the Templeton Foundation, has found (Ѻ) that people, during times of illness, who know they are being prayed for, ironically, far worse. [1]

Theism controversies
The following is a prayer-questioning image sent to Libb Thims (DN=10), in 2014, from Art the God believer (DN=2) amid the launch of the new Atheism Reviews channel: 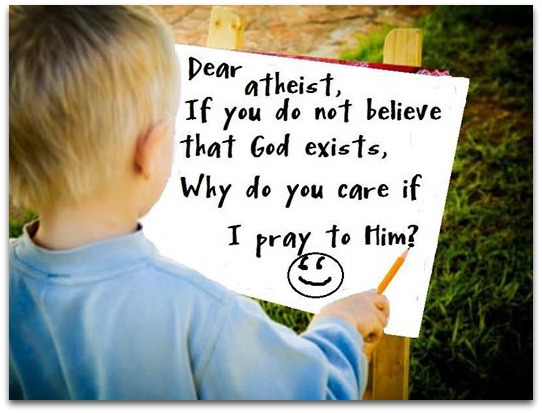 The following is a 23 Sep 2014 response, by American electrochemical engineer Libb Thims, post to the query: why do you care if I pray to God?, showing floating magnets, Islam issues, in the context of the godless so-called "standard model" of the universe: 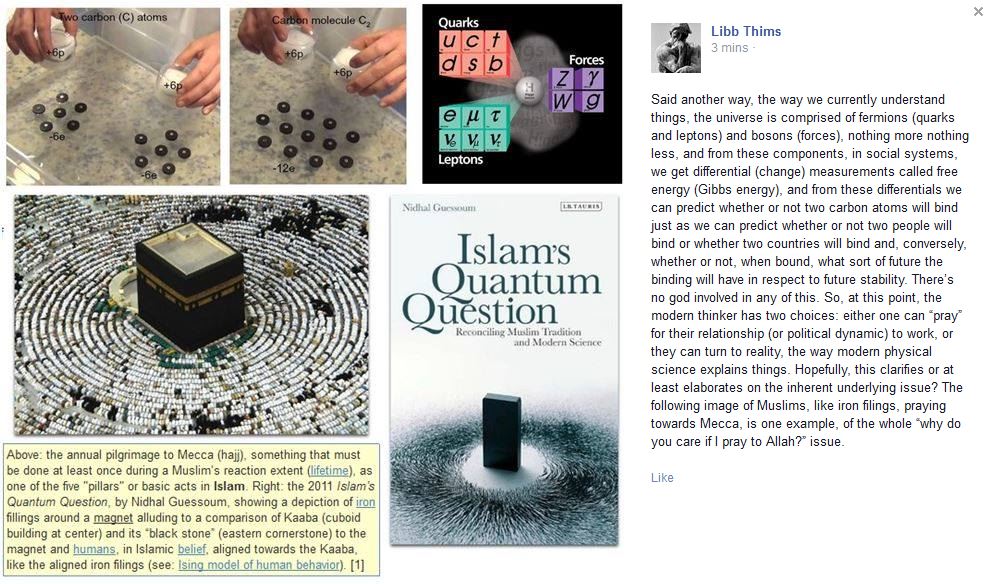 “Prayer is of no avail. The lightning falls on the just and the unjust in accordance with natural laws.”

“Prayer has no place in the public schools, just like facts have no place in organized religion.”