In genius studies, prodigies on god refers to religious beliefs, faiths, creeds (e.g. atheist's creed), if any, and or conversely agnostic, humanist, secular, proto-atheist, or atheist views of child prodigies, who, of peculiar nature, are born into a world with an accelerated ability to process new knowledge, which conflicts with ancient knowledge, which is mythological based, and therein a heightened sense of confusion may arise, particularly when it comes to those able to process thermodynamics, as applicable to the humanities, e.g. James Maxwell, William Sidis, Christopher Hirata, or Luis Arroyo, which is the replacement for the sun god belief systems, i.e. Abrahamic theology or Brahamic theology, presently dominating the basic foundation of the world religions, as taught in the form of Abraham or Brahma, both of which are Ra the sun god transmogrifications. [N1]

Overview
The following shows the 2002 world religions according to Egyptian mythology classification: 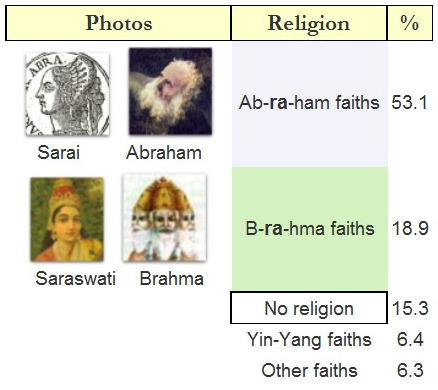 A standing rule, concerning 200+ IQs, particularly for those born after 1895, a belief in god or gods is an automatic disqualification from the 200+ IQ range. This question, in fact, should be the first question asked on any standard high IQ test, whereby an answer of “yes” would result in an unequivocal 15% reduction in the final IQ score. The reason for this is that one’s opinion on the matter of religion, and particularly on the great ‘theory of god’, is a huge demarcation or insight into one’s intellectual framework. God is humankind’s oldest scientific theory, conceived by genius men of olden days. Subsequently, if one is a true modern-day genius, it is a matter of duty to question everything, especially those most established ideas. The theory is so dominant, that, in fact, at a minimum, seventy-two percent of the world's population currently believe this theory.

The theory of god serves its purpose for the masses, but for the all-knowledgeable genius, prior to the early 19th century, one may have been excused for adherence to the theory of god, in its various forms, but after 1822, the year in which the cryptic Rosetta stone was deciphered by English physicist Thomas Young, after which it was possible to see clearly that the main tenets of the major modern day religions (Christianity, Islam, Hinduism, etc.) were simply reformulated Egyptian mythology, particularly the story of the birth of the sun god Ra out of the water or chaos of beginning god Nu, and the afterlife, rebirth, and reincarnation theories that followed:

This issue of religious syncretism became even clearer to the inquisitive genius reader when in 1895 Egyptologist Wallis Budge published The Egyptian Book of the Dead (Papyrus of Ani), wherein after “untold numbers of people began to write books, papers, and dissertations on the parallels between Jesus and Osiris (Ra’s great grandson). [54] The issue of the Egyptian origin to the modern world religions can be said to have solidified, without doubt, after the publication of American religious scholar and Egyptologist Gary Greenberg’s 2000 101 Myths of the Bible, wherein he steps through ever story in the Bible and shows the original Egyptian version (Pyramid texts + Coffin texts), from which these stories (Bible, Koran, Rig Vida, etc.) originated. [55] Beyond this the modern "human molecule" view of human existence, from which humans are of the same family as hydrogen atoms, would forever would act to inter the age-old theory of god, along with other now defunct scientific theories, including: vitalism, caloric theory, flat earth theory, spontaneous generation, and life, in the mind of the true modern universal genius.

Prodigy | Beliefs
In this context, the following opinions on the theory of god, expressed by the listed 200+ IQ group, gives a creditable intellectual litmus test as to the truthfulness of each person's estimated IQ:

Notes
N1. Note: This page started, on 19 Oct 2016, as a paste from the “Prodigies | God” section of the IQ: 200+ page, after finding 2014 discussions of Christopher Hirata’s 13 Oct 2013 Facebook post about how he recited the Lord’s prayer to a homeless person in Colorado. [1] The page may also have origin influence from Thims 18 Oct 2016 application letter for the Chair of the Appignani Atheism Chair, wherein commentary on Puerto Rican child prodigy Luis Arroyo’s age 20 MS physics thesis “A Thermal Model of the Economy”, and how at age 15 he was interviewed about his Jehovah’s Witness beliefs in respect to science.