, pronounced rah, meaning “mouth” (Ѻ), or "Re", "Helios" (Plutarch, 100AD), among other syncretized names, e.g. Ra-Atum (or Atum-Ra), or Amen-Ra, etc., is the sun or sun god, of Egyptian theology, that was said to have burst forth out of a land mound Nun following the chaos of beginning, and ascend into the sky bring the first light into the world, and being the progenitor to all life; he is often depicted as a falcon or falcon carrying the sun disc, or falcon-headed man (similar to the older god Horus). [1]

Etymology
The following gives some overview of the nature of the mouth symbol in the hieroglyph for Ra:
-

“When writing the characters of their language, Egyptian scribes ignored vowels and recorded only the consonants. The phonetic ‘r’, for example, is represented by the hieroglyph

, which is the ideogram of the human mouth. This one hieroglyph could represent a consonant as variably pronounced as ra, re, ar, er, and so forth.”

— Daniel Gunther (2015), “Thoughts on the 20th Anniversary Edition” in the Faulkner-translation of the Egyptian Book of the Dead (pg. 20)

In this direction, the etymology of “Ra”, according to Wallis Budge (1904) is unknown; it is possible, however, that Ra is related to the sound “wa-hu” (Ѻ), aka the “baboon bark”, per reason that the baboons were worshiped in ancient Egypt as sun god like animals, like the scarab beetle, per reason that they greet the morning sun each morning, like a worshiper.

Ra | Morning, Noon, and Evening
The following shows Ra as "Ra-Khepri", i.e. the dung beetle, or the "morning sun":

The following (Ѻ) shows Ra as the "noon sun": 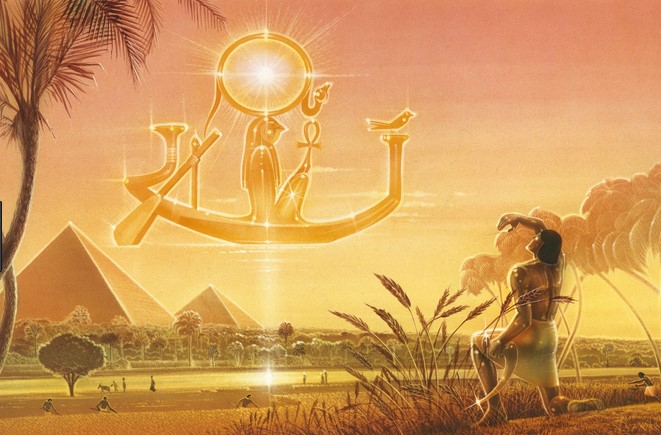 -
The following, below left, shows Ra as the "evening sun", as Atum-Ra (or Ra-Atum), and also, below right, as "Horus the elder", as the two models seemed to have been syncretized at some point: [4]
-
(add)
Palms
In Egypt, Ra was celebrated with palm brushes during the winter solstice. This, supposedly, is a forerunner practice to "palm Sunday" of modern Christians.

Ra theology
The concept the sun being a god called Ra or Re, the center piece of Ra theology, is said to date to the scattered tribal pre-dynastic period of Egypt (4000BC).

This Ra sun god model was carried over through modified syncretism during the various steps in the combined changes in power centers in the course of Egyptian history: Heliopolis (3100BC), Memphis (2800BC), Hermopolis (2400BC), Thebes (2040BC), and Amarna (1350BC), at the latter stage of which Ra became a monotheistic god called Aton.

The following shows Ra riding his solar barque over the body of the god Nut, i.e. the heavens, in his daily journey, according to Heliopolis creation myth, the dominant version of Egyptian cosmology; the god Geb lying on the ground, and Shu, the air or dividing god between Geb and Nut: [3] 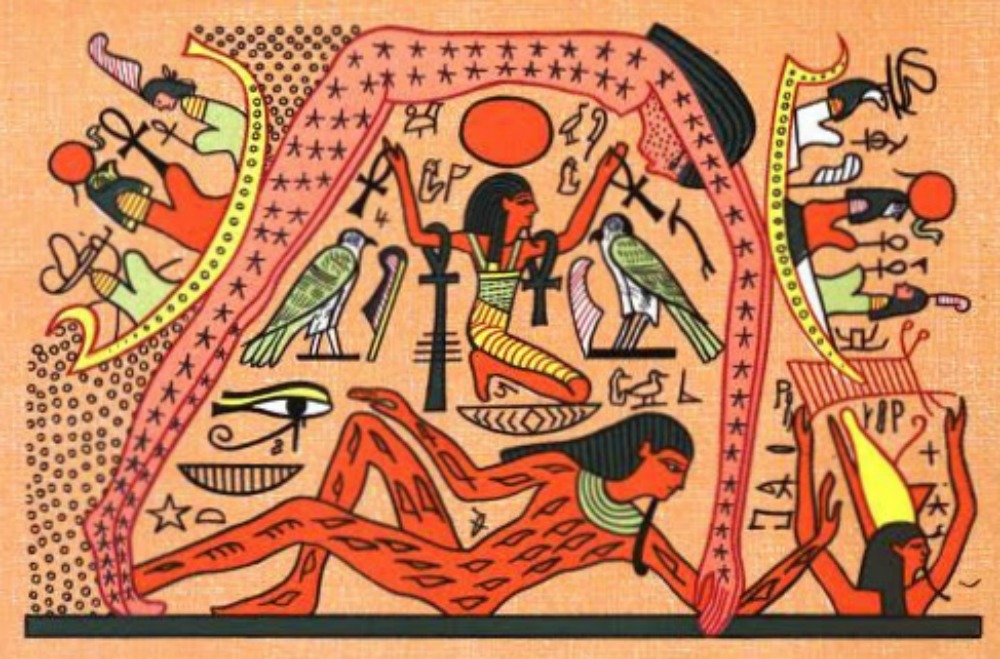 The centerpiece of this theology is the morality system found in the concept of the negative confessions, a type of weighted soul/karma after death measurement.

In the centuries to follow, this morality structure then branched off into two sects: (a) the B-ra-hma-ic faiths, a reincarnation based theology, typified by the creator god Brahma (1000BC), and (b) the Ab-ra-ham-ic faiths, a resurrection based theology, typified by the creator gods YHWH (1200), God (100BC), and Allah (570AD). [2]

“This name Abram or Abraham at once suggests the mythological nature of the history. It is one of the innumerable instances in which, in the ancient world, the sun, or a priest of the sun, was claimed to be the patriarch or first ruler or lawgiver of many nations. In Egypt ‘Ra’ was the Sun, and Osiris an incarnation of the Sun, was the first ruler there. Brahma was the first lawgiver of the Hindus, and there is little doubt that ‘Brahman’, as stated by Thompson, in his notes to the Bhagavad-Gita, was originally a name for the sun. This word ‘Ra’, meaning ‘bright’, is contained not only in the Egyptian mythological names connected with the sun, but a long list might be given, in which it appears in the names of all the sun heroes of all the Indo-Aryan languages, just as the cognate word ‘El’, ‘bright’, appears, in the same way, in the names of the Semitic sun heroes:– Amen-Ra-Pharaoh (the earthly manifested Sun-Ra); Indra (the Bright God Ra, who brings the rain drops); Sekra-Brahma-Rama-Varuna = Ouranos; MithraSurya-Ahura-Mazda ; Rudra-Ravi (the Sun) Saranyu (the Dawn). This list of sun heroes, with ‘Ra’ in their names, might be prolonged for pages, but it is unnecessary. A similar list of Semitic sun gods, with ‘El’ or ‘al’ in their names might also be made.”