In terminology, reality refers to the quality or state of being real or that which is real—existing as a physical entity and having properties; something not artificial, fraudulent, illusory, or apparent; the totality of "real" things and events; something that is neither derivative nor dependent but exists necessarily. [1]

“Crebillon … treats the passions like playing cards, that one can shuffle, play, reshuffle, and play again, without their changing at all. There is no trace of the delicate, chemical affinity, through which they attract and repel each other, reunite, neutralize [each other], separate again and recover.”

Goethe expressed this opinion in a letter to his intellectual friend German author Friedrich Schiller, to the effect that Crebillion's writing is not realistic in the sense that it is not based on the way that people "react" to each other, according to the principles and outcomes of chemistry.

This, supposedly, was the start of realism literature, whose follower include: English realism philosopher and novelist George Eliot and Spanish realism novelist Leopoldo Alas who, according to American physical organic chemist and literature chemistry historian Stephen Weininger, is an inspired successor of Goethe’s Elective Affinities realism novel. [3]

The following is an ironic 2015 email communicate from Issuu.com to Libb Thims that his 2008 The Human Molecule booklet, on the history of human molecular theory, has been added to a book stack themed on “reality”, by user Craig Zimmermann (Ѻ), along with publications such as Pierre Teilhard’s The Phenomenon of Man (1939), Clifford Pickover’s Strange Brains and Genius (1998), among others; which corroborates will with James Eadon’s 2001 poll findings that indicate that some 43 percent of people do not, in reality, think that a human is a giant molecule. 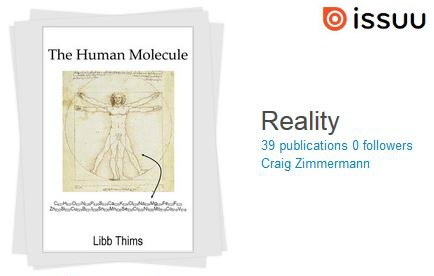 Real world
In 1971, American chemical engineer and physical chemist Frederick Rossini gave his famous “Chemical Thermodynamics in the Real World” Priestley Medal address, the abstract of which is as follows: [4]

“For my talk this evening, I have selected the subject "Chemical Thermodynamics in the Real World," because it represents an area in which I have worked a great deal and because it relates to present-day problems of our society. I will try to show that thermodynamics is a discipline highly relevant to the real world in which we live and that its fundamental laws may be related to human experience.”

This bold statement resulted to launch the 2006-present Rossini debate.

“One major difference between the ‘games’ played by theoretical physicists and those played by pure mathematicians is that, aside from meeting the demands of internal consistency and mathematical rigor, a physical model must also meet the inflexible boundary condition of agreeing with physical reality.”

“What is real? How do you define real? If you’re talking about what you can feel; what you can taste; what you can smell and see; then real is simply electrical signals being interpreted by your brain.”