In chemistry, retort is a laboratory apparatus consisting of a glass bulb with a long downward angled and tapered neck, used for distillation or reaction in chemical processes, according to which a liquid substance is placed in the bulb, then heated, after which the vapor goes into the downward tapered neck and is collected. [1]

History
The retort is said to have been invented in circa 800 by Arab chemist Jibir.

Elective Affinities
The following, to exemplify verbal use of the retort in experiment, is Swedish chemist Torbern Bergman’s reaction scheme #42, where the triangle symbol Δ in the center of the diagram signifies that the reaction is heated or carried out in “the dry way”: 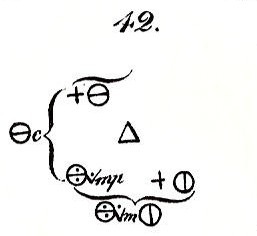 which shows that “if common salt be subjected to distillation with nitrous acid, the marine acid will rise [top upward pointing half crotchet], and the fossil alkai remain in the retort [bottom downward pointing full crotchet]”.

German polyintellect Johann Goethe used these reactions of Bergman's as the basis of his 1809 physical chemistry novella Elective Affinities. It soon began to be suggested, by commentators, that Goethe envisioned the estate or parts of his chapters in a retort sense:

“Elective Affinities is a narrative drama, in which two men and two women, a married couple and two unmarried characters, interact as if in a chemical retort.”

“The decision to invite Ottilie and the Captain is described as an 'experiment' and this is exactly what it is: the house and its surrounding gardens are in effect a chemical retort in which the human elements are brought together for the reader to observe the resulting reaction.”

“An interpretation of the novel seems to be hinted at here: these events are the human equivalent of an experiment in a chemical retort. The movements of passion between Edward, Ottilie, Charlotte, and the Captain are no different from the operations of ‘Wahlverwandtschaft’ between limestone, carbon dioxide, sulphuric acid and water. The human figures and events are but the manifestations of concealed natural forces, possibly not yet wholly understood by science.”

In 2009, American comparative literature scholar Karen Pinkus comments the following about the chemical revolution, which she pinpoints to the work of Antoine Lavoisier:

“The characters in Goethe’s Elective Affinities behave as if the Revolution had never happened—or better yet, they combine and separate as if inside a hermetically sealed retort.”


Quotes
The following are related quotes:

“We must not read into [living organisms] either a chemical retort or a soul: we must read into them what there is.”

“Physical phenomena in the gross is not concerted with the internal structure of each atom in each successive moment, nor is history with the relation of each individual being every moment of time. History is vitally interested in the laws of continuity in finite space and definite time. Were it not for the existence of these laws developed from definite relations subsisting among the mass, all science would be impossible. These propositions are fundamental in physics, and they apply with equal footing in history. Society is a definite reality. All we have to do is to look about us to be conscious of its ubiquitous presence though no one yet has examined it under the microscope or tested it in a chemists’ retort. The retort will be that we are comparing inert matter, iron, with a living reality, society. Matter [after all] is not so terribly inert.”