Overview
In the 1930s, after the nucleation reaction was discovered, the question of the issue of the application of thermodynamics on the nanoscale began to emerge. [5]

In 2001, Hill began to use the term ‘nanothermodynamics’, as a shortened version of the older phrase ‘small system thermodynamics’.

In 2016, Kilian Singer (project head), PhD student Johannes Rossnagel, and Ferdinand Schmidt-Kaler (head of the QUANTUM group), of laboratory at Mainz University, as summarized in their Science article “A Single-Atom Heat Engine”, report on a study wherein the claim to have made a single atom heat engine; the abstract of which is as follows: [4]

“Heat engines convert thermal energy into mechanical work and generally involve a large number of particles. We report the experimental realization of a single-atom heat engine. An ion is confined in a linear Paul trap with tapered geometry and driven thermally by coupling it alternately to hot and cold reservoirs. The output power of the engine is used to drive a harmonic oscillation. From direct measurements of the ion dynamics, we were able to determine the thermodynamic cycles for various temperature differences of the reservoirs. We then used these cycles to evaluate the power P and efficiency η of the engine, obtaining values up to P = 3.4 × 10–22 joules per second and η = 0.28%, consistent with analytical estimations. Our results demonstrate that thermal machines can be reduced to the limit of single atoms.”

The basic parts of their single atom engine is shown below: 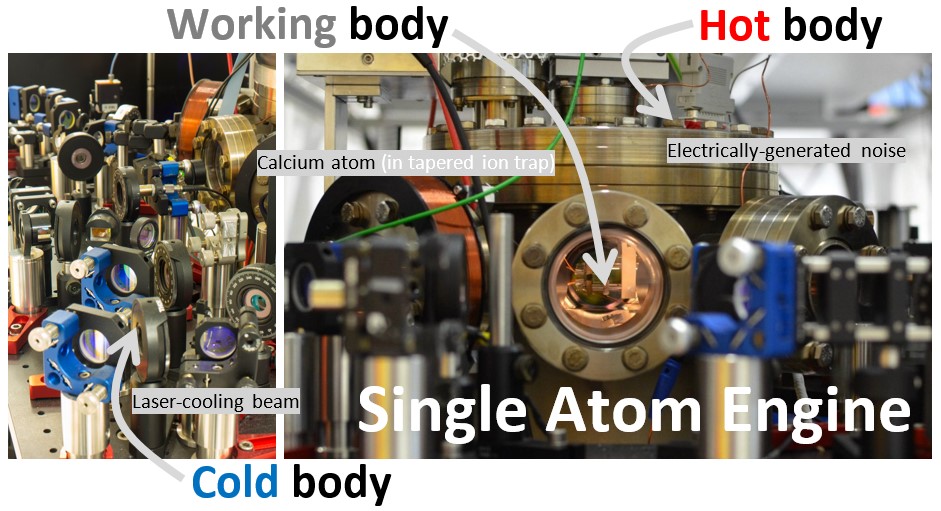 In commentary on the single heat engine revision #6, in respect to the query by Thims: “do I have your engine labeled correctly here, in regards to location of hot body and cold body”, Johannes Rossnagel stated the following: [6]

“In principle its fine. The hot bath electronics is hidden under the table and provided by a cable which is not part of the picture. But you say that it is electronic noise, so it’s fine for me. You could point to the upper part of the right picture, there you see a gray plug on top of the vacuum chamber. That is where the electronic noise reaches the experiment.”

Thermodynamics not applicable?
The subject of single particle thermodynamics is a bit of an uncharted subject.

“The law of entropy increasing is only a statistical law; it is not ‘fundamental’ because it cannot describe the behavior of an individual atom or molecule; it deals with the average number of them. Entropy is not a concept that can be meaningfully applied to a single particle, or even to a small number of particles.”

This is one of the commonly ‘supposed’ violations of the second law. The issue here is that Morris seems to be unaware that the subject of small systems thermodynamics exists (as well as nanothermodynamics); second, that Morris may be a closet Christian, objecting to the second law owing to religious beliefs about god and free will (as his book is filled with this discussion); third, entropy being simply a mathematical formulation of heat, Morris is missing that fact that even single molecule (or single atom or particle), contained in a system (or volumetric region), can be heated and cooled so as to act as the working body of a heat engine, and thus produce work, but not perpetual motion work, meaning that heat added and taken away during each stroke, will not compensate each other exactly.

In any event, Morris cites John Wheeler who said “ask any molecule what it thinks of the second law of thermodynamics and it will laugh at the question”, which Morris interprets to mean that:

“The behavior of a single molecule can only be described by the basic, time-symmetric laws of physics, such as those of mechanics or quantum mechanics. The behavior of an individual molecule is not constrained by the law of increasing entropy.”

Morris, here again, is showing is ignorance of basic science, in favor of some underlying motive (possibly subatomic particle dynamics issues, being that he discusses positron-electron annihilations). Of note, he seems to be unaware that quantum mechanics was derived from the second law by German physicist Max Planck. Second, his use of the term “law of increasing entropy” signifies that he has an elementary understanding of thermodynamics.

In 1992, American physicist Steven Weinberg, in reference to Philip Anderson’s discussions of emergence, amid discussions of reductionism, in respect to which science is the most fundamental, states, rather questionably, that temperature and entropy are "emergent concepts" (see also: emergent property): [2]

“Even though thermodynamics has been explained in terms of particles and forces, it continues to deal with emergent concepts like temperature and entropy that lose all meaning on the level of individual particles.”