Overview
In 1896, Maurice Hauriou mentions the term “chemical potential” in the context of social phenomena; but it remains to be discerned in what sense he employs this usage. [1]

In 1980, American sociologist Ed Stephan and American chemist George Gerhold began to ponder how the Gibbs fundamental equation, of the form: [1]

where E is the energy, S the entropy, p the pressure, V the volume, μ the chemical potential, and N the number of particles of the system, applies to sociological systems of people. The diagram they had in mind, as found in Stephan's The Division of Territory in Society (1995), to quantify potential, is as follows, aka the Stephan social system: [7] 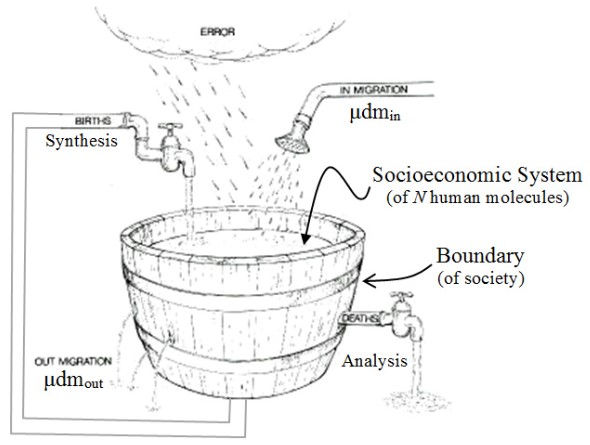 Some of the questions they speculated at include: [2]

“What is the total time in a social system? At the level of particles, temperature is just velocity of movement. I sense an analogy between temperature in physical systems and the technology of transportation and communication in social systems. Modern societies are 'hotter'. Big cities (high interactance centers) are 'hot': People, commodities and ideas move around faster. 'Hot' regions subdivide territory more thoroughly than 'cool' ones.

And what is entropy — unpredictability? is that what we call freedom? What is the social equivalent of the product entropy-times-temperature? Freedom of movement? What do pressure and volume suggest, if anything?

Could the raw product kNT be given some sociological meaning? Do humans have something like chemical potential, some sort of (bonding) potential? Maybe the last two terms in could be combined into something with a meaning specific to sociology. Combining them into -N(1 + α), with N as a population — what would be the sociological significance of the factor -(1 + α)/β? Could the value for β computed above in the case of urban population distributions (β = 2v/xμ) have any application?”

In answer to some of these questions, he says that he didn't or doesn’t know.

In 1985, Hungarian economist Andras Brody, in his “An Essay in Macroeconomics”, coauthored with Katalin Martinas and Konstantin Sajo, wherein, building on the work of John Neumann (1934), Paul Samuelson (1955), and Nicholas Georgescu-Roegen (1971), they outline an economic thermodynamics model, in which, among other things, they attempt to argue for a social chemical potential model, to the affect that “market prices are the chemical potentials µi derived from the economic entropy, which is now U”, according to Hungarian theoretical physicist Bela Lukacs who frequently cites their work as the “Bródy-Martinás-Sajó model”. [8]

In 1994, Australian physical chemist John Christie, in his "A Survey of Thermodynamical Ideas", built on the work of John Neumann (1932) and discusses how microcanonical ensembles can be used to formulate economic analogies, wherein he employs a 6-person "island model", in which goods are traded, resulting in a microstate currency distribution; how social equilibrium relates to Gibbs free energy; how coupling and time scales may play a role, etc., in economic processes; then discusses Gibbs free energy, in definitional terms, and alludes to the premise that when an inhabitant enters or leaves the island—if the island were an "open" system—the “component will move into or out of the system to minimize its chemical potential, i.e. it will tend to flow from regions of higher to lower chemical potential.” [2]

In 1999, American physicist Wayne Saslow, in his article “An Economic Analogy to Thermodynamics”, in which he goes through a considerable, albeit mostly empty, derivation, wherein starts off with a 1980 study on the experimental findings of rat economic behaviors, and goes on to argue that the state of an economic system, being a physical system, must be quantified by a temperature and conjugate variable pair entropy, during which he equates price p of some entity (check) to chemical potential. [3]

In 2001, Peruvian chemical engineer Alfredo Infante, in his “Social Entropy: A Paradigmatic Approach of the Second Law of Thermodynamics to an Unusual Domain”, was digging around at some type of chemical potential application in sociology. [6]

In 2006, Iranian-born American materials scientist Robert Kenoun, in his postulations on the nature of the internal energy of various types of human social systems, e.g. a five-member family or a society, etc., posits that if one member of the system of a family were to leave, e.g. a father dies, which he correlates to a “loss of mass” in the system, there would result an increase of internal stress among the relational bonds of the remaining members, which Kenoun equates to a change in the internal energy of the system; the underlying supposition here, alluded to by Kenoun, seems to be a chemical potential change model, of sorts. [5]