In terminology, soul mate, or “soulmate” or “split soul theory”, is an Egyptian-Greek religio-mythology, clay creation myth based, origin of humans model, which posits that humans originated in pairs, bound in one body, with one original soul, but were "split" in two, supposedly for doing something offensive to the gods, after which the newly separated humans forever wandered the earth in search of their long lost soul mate so to reunite their incomplete souls and become one again.

Egyptian | Mythology
In c.2000BC, in the Book of the Dead (§17.16), we find that the origin of the split soul theory derives from the Heliopolis creation myth, and the model of two gods, Shu and Tefnut, and their god souls, deriving from one god, Atum, and his one god soul; Wallis Budge (1904) summarizes this as follows: [11]

“From the Book of the Dead (xvii. 16) we learn that Shu and Tefnut were supposed to possess but one soul between them, but that the two halves of it were identified with the soul of Osiris and the soul of Ra, which together formed the great double soul which dwelt in Tattu.”

Greek | Mythology
In 600BC, Greek philosophers, including Solon, Thales, and Plato all visited the great college at Heliopolis, and that Plato, while studying there, learned their soul-splitting origin of gods and humans theory.

Plato
In 400BC, Plato, after studying abroad in Egypt, penned the modern version of soul mate theory, according to which the formerly-known supreme god Atum, who in the Early Kingdom became Atum-Ra, who became Amen-Ra in the New Kingdom, who became Zeus, or Amen-Zeus, as Alexander the Great (332BC) later legally defined things, split one original human into two humans with half-souls.

The gist of Plato's version of soul mate theory, according to one account, is the story that: “our ancestors once had two heads, four arms [and supposedly one soul]. They did something to offend a god so that god punished them by splitting them down the middle, resulting in the creation of humans. As a punishment, we are condemned to spend our lives searching for the other half, our soulmates.” (Ѻ)

In c.375BC, Plato, in his Symposium (Ѻ), via dialogue, through the voice of Aristophanes, described the gist of long lost split souls in search of each other, as follows: [1]

“The intense yearning which lovers have toward each other does not appear to be the desire for sexual intercourse, but for something else which the soul of each desires and cannot tell, and of which he or she has only a dark and doubtful presentiment.”

“According to Greek mythology, humans were originally created with four arms, four legs and a head with two faces. Fearing their power, Zeus split them into two separate parts, condemning them to spend their lives in search of their other halves.”

In 45BC, Cicero, in his On the Nature of the Gods, ridicules Plato’s Egyptian religio-philosophy derived round-shaped first human model as follows: [12]

“I express my surprise at the slow-wittedness of those who would have it that a living creature endowed with both immortality and blessedness is ‘spherical’ in shape, merely because Plato maintains that no shape is more beautiful than the sphere. In my view, the cylinder, the cube, the cone, the pyramid are more beautiful. And what sort of life is assigned to this rotund god?”

Original sin | Adam and Eve
In the split human myth of Aristophanes, humans, supposedly, had neither love for one another nor piety toward the heavenly powers; they were, according to Irving Singer, guilty of original sin, who once they sinned, became human beings who were faced with a characteristic moral choice: either to achieve wholeness though love or to renew their insolence toward the gods and run the risk of being diminished further. [4]

This logic, supposedly, was thereafter translated into the "Adam and Eve", i.e. Clay and Breath, Hebrew (Is-Ra-El-ite) version of the origins of humans, as passed along to the world in Biblical/Quranic story creation as told in Genesis.

Goethe
German thinker Johann Goethe, in his Elective Affinities (P1:C5), among the numerous "love theories" he embedded in his novella, employed Plato's split soul or soul mate theory, in coded form, via alternate side headache logic, that the characters (or reactants) Eduard (B) and Ottilie (D) are long lost "soul mates" destined for each other (see: Goethe on the soul), a secret he alludes to, in coded form, by discussion of how they each have head-aches on the opposite sides of their heads, per reason that they used to be conjoined at the back, and originally had one brain (according to Plato's soul mate theory): 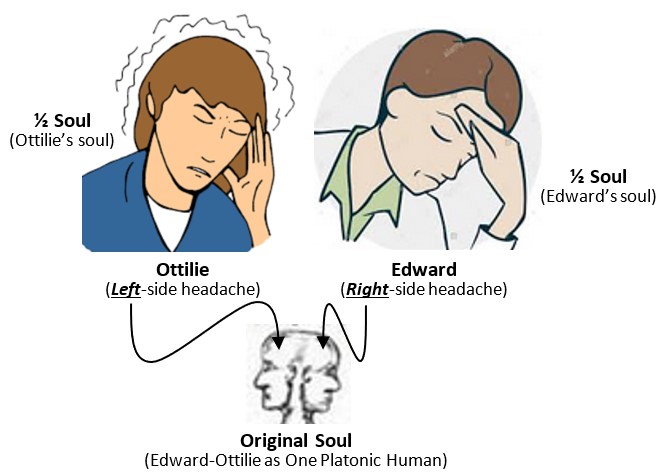 The key excerpts are as follows:

“Enough!” Edward cried at last, “it is decided. She comes. You, my love, are provided for, and now we can get forward with our work. It is becoming highly necessary for me to move over to the right wing to the captain; evenings and mornings are the time for us best to work together, and then you, on your side, will have admirable room for yourself and Ottilie.”

Charlotte made no objection, and Edward sketched out the method in which they should live. Among other things, he cried, “It is really very polite in this niece to be subject to a slight pain on the left side of her head. I have it frequently on the right. If we happen to be afflicted together, and sit opposite one another,—I leaning on my right elbow, and she on her left, and our heads on the opposite sides, resting on our hands,—what a pretty pair of pictures we shall make.”

The Captain thought that might be dangerous. “No, no!” cried out Edward. “Only do you, my dear friend, take care of the D, for what will become of B if poor C is taken away from it?” “That, I should have thought, would have been evident enough,” replied Charlotte. “And it is, indeed,” cried Edward; “he would turn back to his A, to his Alpha and Omega;” and he sprung up and taking Charlotte in his arms, pressed her to his breast.

Modern | Theory
In 1841, American philosopher Ralph Emerson, in his essay on friendship, influenced by Goethe, defined the nature of friendship in terms of chemical affinity as such: [1]

“Conversation is the practice and consummation of friendship and great conversation requires an absolute running together of two souls into one, yet it is affinity that determines which two shall converse.”

The term 'soul', used here, to clarify, is the Ra-theology based term for what, in 19th century logic, would be called "moral movement" described and quantified by the "moral symbols", in modern physical science parlance.

In 2014, webcomic Randal Munroe, in his What If?, gave the following parody, a result of viewer query submission, of soul mate theory taken at face value, scientifically: [5] 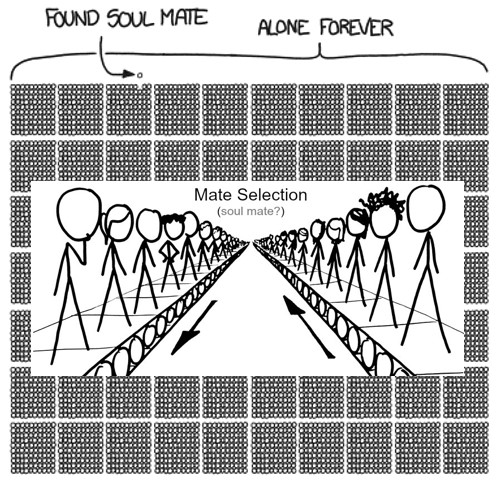 namely that the probability of finding one's soul mate, amid 6+ billion people, is so small, that people will always opt out for the next best thing; or something along these lines.

“What is the soul, but an empty word to which no idea corresponds?”

“My mind is incapable of conceiving such a thing as a soul. I may be in error, and man may have a soul; but I simply do not believe it. What a soul may be is beyond my understanding.”

— Patrick Fergus (2014), response statement when Libb Thims told Pat that he was conducting a “What is the Soul Comprised of?” polling of 36 people; also picked as most-liked answer by vote, Sep 28 [9]

The modern view, without going into detail, is that "soul-matching", i.e. finding true love, the gist of which captured approximately by the following progression of views:

“True love is like ghosts, which everybody talks about and few have seen.”

“True love is a chemical affinity of human monads; they are elementally attracted to one another by the invincible necessity of a law of nature. In the spiritual and physical make-up of those predestined by nature to be joined, a series of inherent correspondences is found.”

“True love is your soul’s recognition of its counterpoint in another.”

gets translated into the human chemical thermodynamics language of "free energy matching", the exact same way that atoms, molecules, and chemicals are matched, namely according to the first law and second law of thermodynamics, the gist of which is found in the logic of matching people via human free energy tables, the gist of which is captured in the above image, namely each person has a given free energy of formation, per given state of existence, and whenever two people pair, a corresponding free energy formation of that bonded entity, i.e. dihumanide molecule, will determine if the pair is to be feasible, i.e. thermodynamically permissible. The greater the negative free energy change of the hypothetical (or real) pairing, the more likely is the pair to experience what Plato conceptualized as a soul mate or what we speak of in modern terms as true love.

In 2007, Libb Thims summarized the basics of free energy matching, the upgrade to soul mate matching, as follows: [13]

“The direct extrapolation in human chemistry is clear. In time, affinity or free energy tables will be formulated for human molecules. In other words, in the future instead of going to the local bar or dance club to find a passionate match, a person will be able to consult human free energy tables, likely listed online, and thus be able to pick out the one person in the world with which he or she will have the greatest interpersonal chemical affinity and reaction potential.

In the coming millennium, we propose that someone will construct a digitized, complete, and exacting world encompassing, human affinity table, updated on the microsecond, able to categorize the rapports of billions of human molecules. That is, it will be possible for a willing and interested person to consult human affinity tables, or technically 'human thermodynamic tables', to see the energetic rankings of those human molecules with which he or she will be most apt to bond to or react with, as well as those human molecules for which chemical reactions would be extremely disfavored. The time, frustration, and mental repercussions of having gone through malformed, non-favored, or troubled reactions will be spared.

Once the inquisitive user puts themselves in the physical proximity of the other, the reaction would be irresistible. For the most intimate of personal reactions, one will be able to select the most chemically and thermodynamically matched person on the face of the earth to react with, such that no other human molecule would have the power or affinity to displace the one most potent, at least within the equilibrium confines the reaction window.”

Some of this logic, to note, was outlined in the concept stage pair-matching site ReactionMatch.com, which was filtered through at least one Match.com CEO.