Humorous examples include: the Entropy Clock, The Entropy Institute, and the 2004 rap parody entropy (song) by MC Hawking.

Jokes
The following is a thermodynamics joke: [12]

Joke: “What is the difference between thermodynamics and a stick?

Answer: “A stick has two ends and no beginning. Thermodynamics has two ‘beginnings’ (the first and second law) and no end.”

Funny quotes
A noted, albeit unreferenced quote, dated before circa 1950, tracing loosely to a 1941 publication of American physicist Percy Bridgman, is: [1]

“There’s as many versions of the second law as there are thermodynamicists.”

In one episode of the The Simpsons, after Lisa constructs a perpetual motion machine whose energy increases with time, Homer scolds her with:

“In this house, we obey the laws of thermodynamics!”

In the late 1940s, German theoretical physicist Arnold Sommerfeld, having previously written a series of books in physics: mechanics (1943), electrodynamics (1948), optics (1950), etc., was asked why he had never written a book on thermodynamics? The following is his humors and frequently quoted answer: [8]

In an odd twist of fate to this quote, in April of 1951, while in the midst of writing a book on thermodynamics (Thermodynamics and Statistical Mechanics), and having been nominated 81 times for the Nobel Prize (more than any other physicist), but not yet having won, Sommerfeld was killed from injuries after a traffic accident while walking his grandchildren. The book was published post-humorously the following year. [9]

A large number of thermodynamics founders and founders of human chemistry (e.g. Otto Weininger) and their relations have notoriously met their reaction end (death) by their own hand:

The seed of the thermodynamics of hell joke originated in the circa 1920 article “The Temperature of Heaven and Hell” written by American physicist Paul Foote.

Another humorous tidbit is the story about a thermodynamics professor gave a take-home exam to his graduate student with the question: “Is hell exothermic or endothermic”, with the conditioner: support your answer with a proof. [5] One source argues that Tim Graham, a student of the University of Oklahoma, is the author of the story. [6] Another source claims that it was given in a University of Washington chemistry mid-term. [7]

Cartoons
The following are humorous entropy or thermodynamics cartoons:


The following is a 2010 “Sandra and Woo” humorous cartoon on the second law, heat death, and the meaning of life: [11] 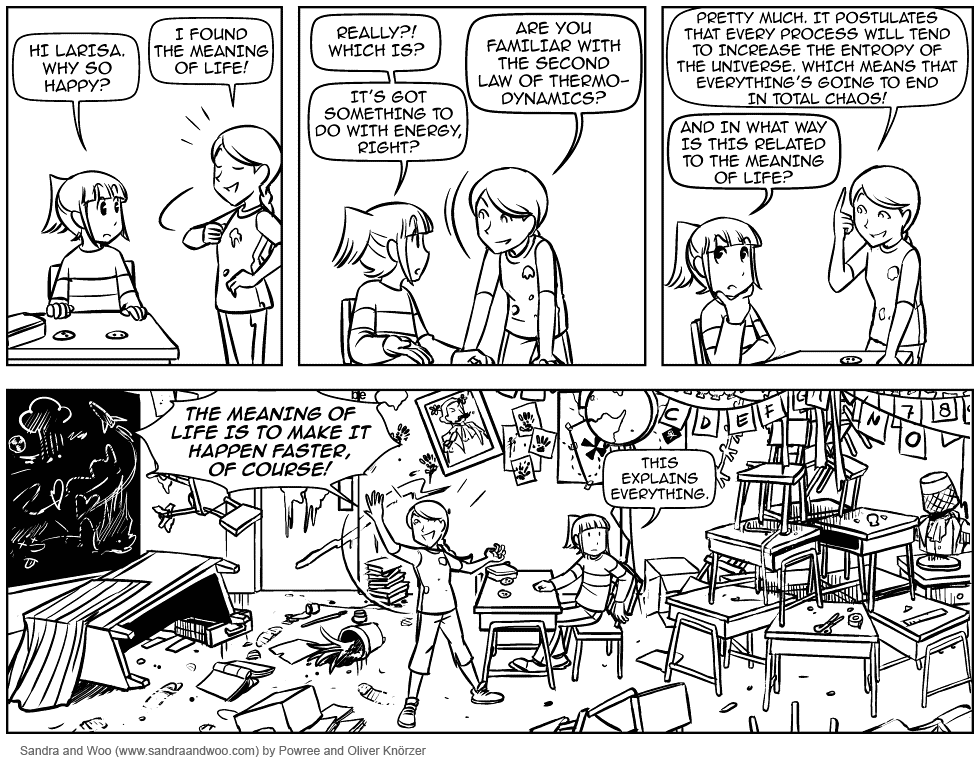 Videos
The following are funny or humorous thermodynamics-related videos. One is a funny November 15, 2007 video titled "Baby Thermodynamics", on the nature of absolute zero of temperature in relation to motion, is shown adjacent. The second is a Lego animation on the four laws of thermodynamics:


Other
In 1956, Danish protein physicochemist Kaj Linderstrom-Lang gave a humorous 1956 lecture “The Thermodynamic Activity of the Male Housefly”.

In 1997, Internet writer Lyle Zapato, a great William Thomson (Lord Kelvin) fan, conceived of the Thermodynamic Law Party (TLP) and prior to that, in 1989, the Kelvinic University. [2]

Further reading
● Bredt, James F. (1988). The First and Second Laws: A Cartoon Introduction to Classical Thermodynamics. Publisher: Bredt.
● Highfield, Rodger. (1998). The Physics of Christmas: From the Aerodynamics of Reindeer to the Thermodynamics of Turkey. Back Bay Books.