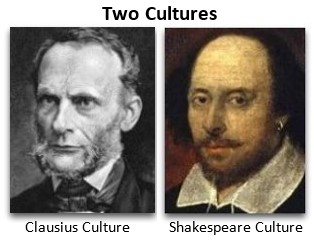 List
The following is a chronological listing of the various two cultures "namesakes" employed—many of which are hmolscience sub-branch sciences, shown with subject coiner; those with photos shown next to term have intellectual dominance, e.g. are high ranking social Newtons, or existive social Newtons, or respectable critiques and historical commentators (e.g. Sorokin) on the subject; namesakes shown bolded and or enlarged signify historical dominance, significance, and or density:

A few recent 2013 tentative two cultures department namesakes, aimed at capturing all of the above, include:

The following are some recent 2014 introductions:

Discussion
The term “human molecular engineering” was used in the University of California, Berkeley article and also in the Gheorghe Savoiu article on the newly-emerging 2008 sociophysics/econophysics applied field of "econo-engineering"; the phrase “physical science applied sociologist”, in regards to physical science applied humanities, was used in reference to Henry Carey; the term “socio-physical chemistry” is a truncation of American philosopher Alexander Rosenberg’s 1980 mocking definition of sociophysics and sociochemistry.

The former proposed term, i.e. department of human molecular engineering, to note, has thematic commonality to all: in that both the “human molecule” perspective and use of the “second law” analysis perspective have historically been used in and cut through every branch of the humanities, engineering, and the physical sciences, uniformly, up to the present, and likely well into the future, and that ideally the proposed two cultures department will need to be centered around a leading chemical engineering university department, as chemical thermodynamics is the core of the subject of chemical engineering, meaning that chemical engineers are generally, as seems to be the case, the leading experts of chemical thermodynamics, physical chemists aside.

The resultant umbrella term human molecular engineering, in this sense, would seem a cogent department title. The future might see the use of something along the lines of "University of [Fill in the Blank], Department of Hmolscience", but presently this term (hmolscience) is a rather new coining (2010), having little immediate recognition (though Hmolpedia, as of 2013, draws near 70,000 page views per month), whereas something like the "Princeton University Department of Social Physics" has immediate subject recognition, albeit is less encompassing, focused generally on "physics + sociology" only, rather than other needed subjects such as economics, history, philosophy, anthropology, and chemistry, and so on.

Societies | Two Cultures
In 2002, the German Physical Society's socio-economic physics division symbol acronym for the "physics", symbolized by the Greek letter Phi "Φ" of socio-economic "SOE" systems, was employing the following image and term, something not found in American physical science society?

In c.2003, he Polish Physics Society created a new division entitled “Physics in Economics and Social Sciences” (FENS), under section president Janusz Holyst, catering to physicists who try to “look over the bridge” between the methods used in physics and those of the analysis of economical and social phenomena. [1]

Other schools | Historical
In "schools of thermodynamics" classification terms, historically speaking, the modern two cultures school would be comparable to: the energetics school (1890-1908), headed by German physical chemist Wilhelm Ostwald, which promoted and or taught a certain amount philosophical thermodynamics (e.g. Robert Lindsay and his 1930s Brown University entropy ethics courses); the Helmholtz school (1845-1923), under the direction of Austrian psychiatrist Sigmund Freud, moved a certain amount of thermodynamics teaching into the format of psychological thermodynamics, such as captured in his 1895 "A Project for Scientific Psychology" (on free energy and bound energy applied to the mental sphere of stored emotions); the Lausanne school (1870-1903), under the guidance of Leon Walras and Leon Winiarski, moved thermodynamics into economics and politics; the Brussels school (1918-c.1980s), under the drive of Ilya Prigogine, taught a certain amount of social thermodynamics and ethics thermodynamics, e.g. Dick Hammond and his 1979 EdD thesis Analysis of Entropy Reduction and its Implications for Ethical Instruction in Public Education, and his followup university courses on this subject at the University of Texas; the spin-off Roegen-Daly school (1971-c.1990s) promotes its own barely palatable brand of ecological economics thermodynamics; the Santa Fe Institute (1984-present) has incorporated a certain amount of hmolscience topics into their publications, albeit mostly in the form of emergence/complexity theory applied to mind from matter theories.

“It is just because the application of the every-day principles of engineering to the animate engine [humans] offers such a powerful corrective to the make-believes of the economic systems of society that I have ventured to address you on the subject.”

Notes
N1. Term used on the Vilfredo Pareto page to capture Lawrence Henderson's sketched out 1935 theory, based on his faculty workshops at Harvard, that:

Though, to note, it seems that Henderson never actually gave a name to what he was arguing.