In science, universe represents the entirety that is accessible to our senses and experiment.

Nun cosmology
The following shows the main "cosmologies" developed over the years, the three of which define what is called "Nun cosmology" developed predominantly in Egypt, a synthesis of the local mythologies of the 42 pre-dynastic nomes (5000-3100BC), which was worked into a nation creation theology, changing theoretical form and development over time, in four different power centers: Heliopolis (3100BC), Memphis (2800BC), Hermopolis (2400BC), and Thebes (2040BC). In Hermopolis scheme, the model became strongly anthropomorphic, in the sense that the god earth (Geb) was viewed as being surrounded by the heavens (Nut) through which the sun (Ra) passed on its daily journey being carried on a solar barque. The Heliopolis creation model, sometimes referred to as the Heliopolitan Ennead (god of nine), as well as the other modified versions, are shown below:


Aristotelian cosmology
The Nun cosmology model, through the teachings of Plato, who traveled to Egypt to learn their sciences and religio-mythology models, was incorporated into the work of Aristotle and afterwords into science. On the specific description of the heavens, Aristotle created a complex system containing 55 spheres, the last of which demarcated the so-called "edge" of the universe—as famously depicted in the 1888 Flammarion engraving, below right, as found in Camille Flammarion’s book The Atmosphere: Popular Meteorology: [4] 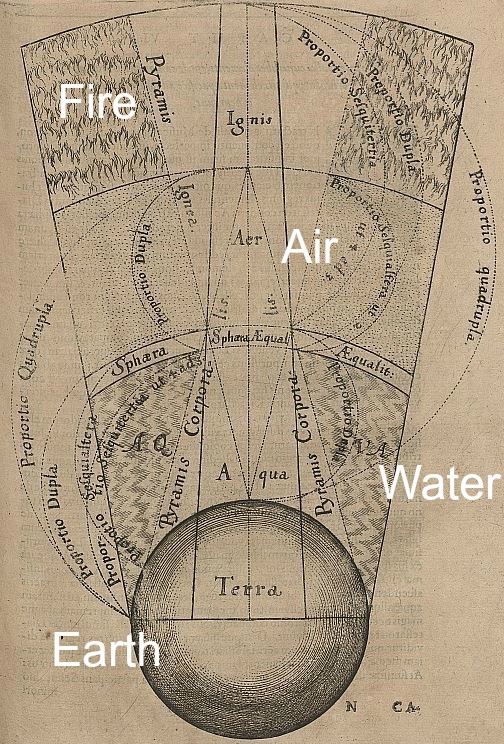 Modern laity views
The following is a generic model of how the average child is taught about existence, i.e. the earth and heaven/hell model of existence, an unwritten mixture of Anunian cosmology, modern religion, and modern science:

Whether the universe of the cosmologist is an isolated system still remains a subject of discussion. This discussion is particularly notable in the field of black hole thermodynamics, in which the laws of thermodynamics seem to be phrased differently depending on whether or not the system contains a black hole. [2]