In religio-mythology, virgin birth is the Christian (aka Roman recension) monotheistic rewrite, i.e. Jesus born of the Virgin Mary via the sexual power of the Holy Spirit, of the polytheistic story of the magical "resurrection sex" (see: black rite) act conception (aka immaculate conception) of the Egyptian man-god Horus, via the embrace of the mummified Osiris (see: death and resurrection of Osiris), brought back to life, for a moment in time (specifically when Thoth stops time), then becomes erect, namely has an artificial phallus, specifically the thumb of Isis, affixed to his body (as his real phallus was cut off and forever lost in the Nile River, i.e. eating by a fish, as legend has it), then unites sexually with the goddess Isis, who hovers over Osiris in the form of a kite (or goddess as bird), therein taking the divine magical sperm of Osiris, and making Horus.

Overview
In c.2000BC, in Spell 148 of the Coffin Texts, the magical "virgin birth" of Horus in the womb of the goddess Isis who waked pregnant with the seed of her departed husband god Osiris is described as follows:

“Isis [Mary], taking the shape as a falcon. The lightening-flash strikes [see: black rite] and the gods are afraid. Isis wakes pregnant with the seed of her [deceased] brother [husband] Osiris [Holy Spirit]. She is uplifted, even she the widow [of the dead Osiris], and her heart are glad with the seed of her brother Osiris. She says: ‘Oh gods! I am Isis the sister of Osiris who wept for the father of the gods, Osiris, who settled the slaughterings of the Two Lands [Upper Nile and Lower Nile]. His seed is within my body, and it is as the son of the foremost of the Ennead who will rule this land and who will become heir to Geb [Joseph] and who will speak for his father and who will slays Seth [Satan], the enemy of his father Osiris, that I have molded the shape of the god [Horus] within (my) egg. Come, Oh gods, so that you shall make his protection within my womb. Know in your hearts that your lord is he, this god, who is in his egg, blue(?) of form, the lord of the gods. Great is their beauty, namely (that of) the blue barbs(?) of the two plumes’.”

Over the next two millennia, this Egyptian "virgin birth" story, as taught in the post Roman recension era, deriving the Passion of Osiris, wherein the god Osiris was betrayed by his brother Set, during their "last supper", then chopped into 14 pieces (half the lunar period or number of stars of Orion constellation), and scattered around the land of Egypt, became the story of the Roman "virgin birth" of Jesus in the womb of Mary by the seed of the "holy spirit". Later the goddess Isis, the lover of Osiris, re-collected all the pieces, put them back together into the form of a mummy, summoned the moon god Thoth to stop time, and at that moment, in a ceremony called the "black rite", hovered over the body of Osiris, in the form of a kite (bird), and got him to come back to life, long enough to make an erection and conceive the god son Horus, albeit the sex being done, supposedly, without any physical contact, spiritually so to say, depicted as follows: 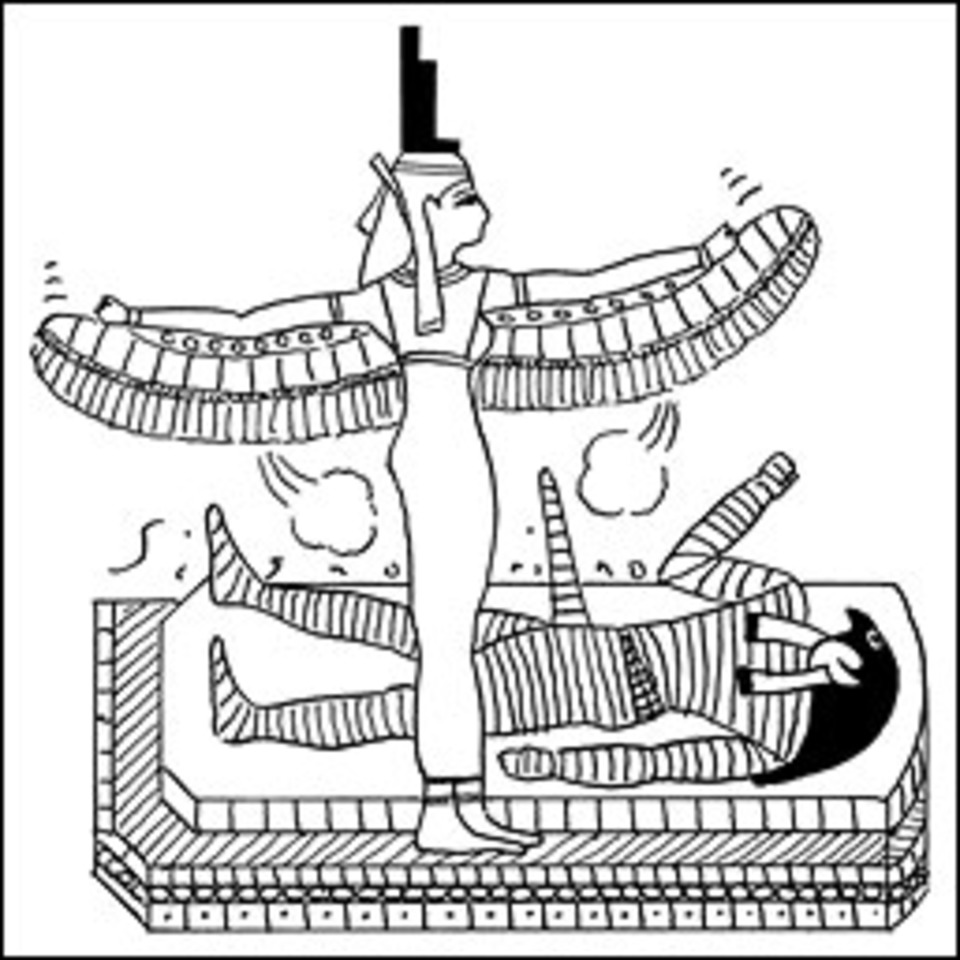 The early Roman recension era Egyptian-Christian theologians rescripted this polytheistic sexual resurrection procreation story, via god reduction, into the the monotheistic or trinity based idea of the virgin birth; the gist of which is summarized below:

“Several of the ancient religions believed in a trinity. India’s was composed of three gods, the Creator [Brahma], the Preserver [Vishnu], the Destroyer [Shiva]. Egypt's trinity was composed of Osiris, Isis and Horus. Isis without the touch of man [she hovered above Osiris in the form of a bird] brought forth Horus, and then married Osiris. The three were one god, and in connection with eight others composed an ennead or assemblage of nine, into many of which assemblages the Egyptians had to distribute their too numerous deities. Alexandria, the capital of Egypt, was a city founded by Alexander the Great in the year BC 322; it became at one time a vast school of religion and philosophy, but its population was addicted to piracy in the century before Christ, and their ships dominated the Mediterranean till the Romans destroyed them and captured their city. The idea of making Jesus and the Holy Ghost gods seems to have originated in Egypt. Says Milman (1840): "The Arians and Athanasians first divided the world on a pure question of faith." These parties took their names from Arius and Athanasius (Ѻ), two Egyptian priests. Athanasius was an Alexandrian and the leader of the trinitarians; Arius would not accept the views of Athanasius, and the controversy reached a stage which seemed to threaten bloodshed.”

This is shown in the following visual: 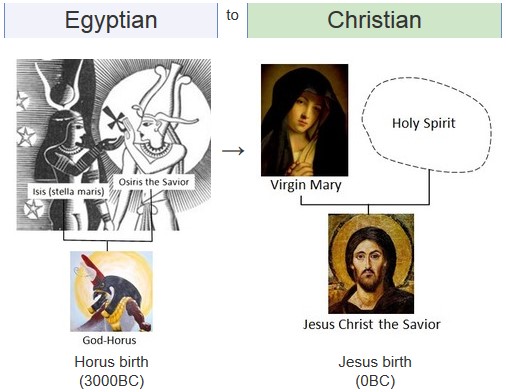 The following shows the magical act of the virgin birth (see: Death and Resurrection of Osiris) carved in stone on the walls of the Dendera Temple (37AD): 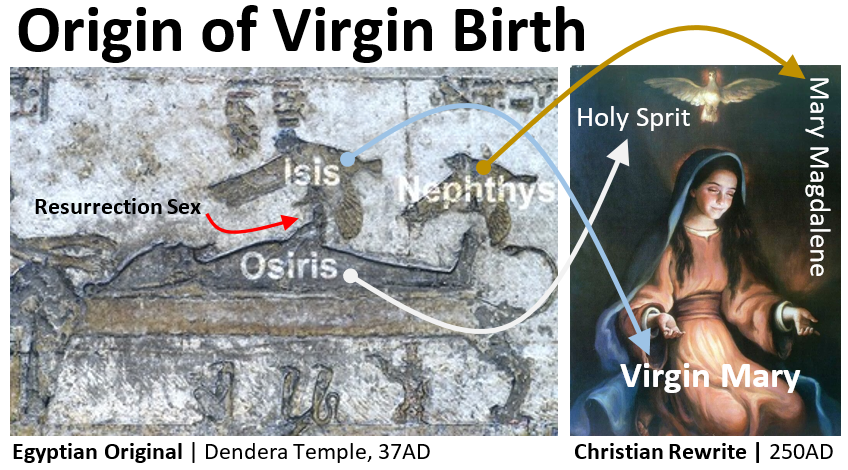 The details of how the character switch from Isis to Virgin Mary, Osiris to Holy Spirit, Horus to Jesus, Nephthys to Mary Magdalene occurred is detailed in the Roman recension, in the context of larger recension theory.

“If our Christ-cultists say that their Jesus Christ was born miraculously from a virgin who had known no men, likewise the pagans had already said that Romulus and Remus, the founders of Rome, were miraculously born of a vestal virgin named Ilia, Sylvia, or Rhea Sylvia. They had already said that Mars, Vulcan, Argus, and others were born of Juno, who had no knowledge of men.”

“When also I am told that a woman, called the Virgin Mary (see: Isis), said, or gave out, that she was with child without any cohabitation with a man, and that her betrothed husband, Joseph (see: god Geb), said that an angel told him so, I have a right to believe them or not.”

“And the day will come when the mystical generation of Jesus, by the supreme being as his father in the womb of a virgin will be classed with the fable of the generation of Minerva in the brain of Jupiter.”

“I believe that every human being has two human parents; but the Catholics believe that Jesus only had a human mother. And other people might believe that there are human beings with no parents, and give no credence to all the contrary evidence.”

“Some people draw unwarranted conclusions from the fact that I never say more about the blessed Virgin Mary that is involved in asserting the ‘virgin birth’ of Christ. But surely the reason for doing so would be obvious? To say more would take me at once into highly controversial regions. And there is no controversy between Christians which needs to be so delicately touched as this.”

“I think it was David Hume who put is slightly vulgarly—about the virgin birth—which is more likely: that the whole of natural order is suspended or that a Jewish mink [?] should tell a lie?”

“That the Virgin Mary was a virgin [didn’t make sense].”

“How can a “virgin” Mary give birth?”