Overview
In 1918, American historian William Thayer, in his address “Vagaries of Historians”, delivered before the American Historical Association, commented in his critique of Henry Adams' 1910 theory that historians begin to incorporate the second law into history studies and history theory, that: [1]

“The time may come when human affairs may be described no longer by words and sentences, but by a system of symbols or notation similar to those used in algebra or chemistry. It may then be possible, as Adams suggests, to invent a common formula for thermodynamics and history.

But, what means of measuring this dissipation would the historian have? If Kelvin’s law is true, there must have been less energy in 1865, when our Civil War [1861-1865] ended, than in 1861, when it began. The energy dissipated during these four years was not only human but material, solar, sidereal, cosmic. Who can compute it?”

The difficulty here, in the modern view, is that both Adams and Thayer were applying what's called the isolated potential, of the various five types of thermodynamic potentials, to the governance of humans, whereas the correct potential, as explained in Gilbert Lewis' 1923 Thermodynamics and the Free Energy of Chemical Substances, is the isothermal-isobaric potential, or Gibbs free energy, according to which entropy increase acts such that the Lewis inequality of natural processes governs the direction of human nature. This is diagrammed below (left) on the extent of reaction coordinate plot.

Subsequently, the initial state of 1861 of the boundaried thermodynamic system of the United States, comprised of a certain number of initial state human molecules, would have been at a heightened or tensioned level of isothermal-isobaric free energy, on the reaction coordinate, possibly near the tip or tipping point of the activation energy barrier EA, or possibly in or near the midpoint of the transition state, and all that would have been needed would be one small "spark" trigger the civil war reaction, just as Gavrilo Princip was said to have triggered or "sparked" the reaction of WWI at 11AM June 28, 1914 after which, five years later, forty million lay dead, a reaction which was followed by a second ebb followup reaction, twenty years later, which claimed another sixty million. [2]

In 1915, English physiologist William Bayliss, in his Principles of General Physiology, re-interpreted Wilhelm Ostwald’s 1912 energetic imperative (the thermodynamic imperative version of Kant's original 1785 categorical imperative), rather interestingly, as: "waste not free energy; treasure it and make the best use of it", and went on to argue that this has great philosophical value, one example of which he gives is that it can be applied to warfare to remedy the "waste involved in war".

In 1919, Russian engineer and writer Yevgeny Zamyatin outlined a thermodynamics theory of revolution. In his 1923 essay “On Literature, Revolution, Entropy, and Other Matters”, for example, he attempted to describe the Russian revolutions of 1905 and 1917 in the language of thermodynamics, supposedly arguing to effect that in wars and revolutions, there are two opposing forces at work, namely energy and entropy. [3]

In 1960, American fighter pilot instructor and combat theorist John Boyd was looking for deeper engineering and modern physical science insight into figuring out anomalous combat statistics from the Vietnam war, namely why the slower bigger less-maneurvable American planes (F-86 Sabre) had a better kill ratio than the faster smaller more-maneuverable Vietnamese planes (Russian Mig-15), and and in this direction entered into the industrial engineering program at Georgia Tech, where he learned the fundamentals of thermodynamics, which he began to apply to his puzzle in regards to pilot combat training behaviors and dog fight reaction behaviors. 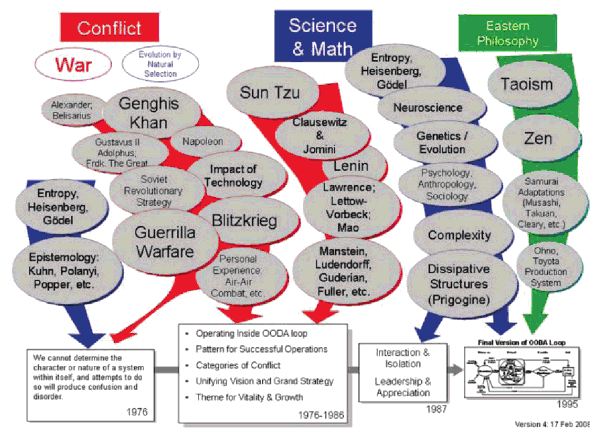 In 1967, Norwegian sociologist Johan Galtung, in his “Entropy and the General Theory of Peace”, a mix of thermodynamics and information theory, attempted to explain peace and conflict using conceptions such as “conflict energy”, “conflict transformation”, “actor entropy”, and “interaction entropy”; postulates that macro-conflicts, such as war between nations, will occur when entropy level is low, while micro-conflicts, such as cognitive dissonance, will occur when the entropy level is high; defines entropy condition of messiness or disorder but not in a pejorative sense; the incapacity of a system to crystallize or establish order permits, for instance, greater complexity and diversity, thus acting to mitigate the reification of violent structures.

In 1976, Melvin Klegerman (Ѻ), a noted thermodynamic coupling theorist (Ѻ), and Hugh McDonald, in their “The Thermodynamics of War” article, published in the American Laboratory journal, attempted to ferret out the beginnings of an instrument-based quantitative social thermodynamics, which they apply to the phenomena of war; the following are snippets from page 62: [10]

G is the capacity of a system to do useful work.
H is the resources available to a system.
S represents the entropy, disorder, freedom, or randomness.

Here, of note, we see them making a reference (Ѻ) to Bruce Lindsay’s “thermodynamic imperative”, conjoined with citation to Albert Lehninger’s Bioenergetics and Gilbert Lewis’ Thermodynamics; and in which they seem to be attempting to quantify work done "by a social system" as being a quantified by a "negative ΔG", i.e. exergonic, and work done "on a social system" as being quantified by a "positive ΔG", i.e. endergonic.

In 1993, French philosopher Jean-Francois Lyotard stated his views on relationship between war and thermodynamics as follows: [6]

“Conflict and ultimately war do not arise between human and nature; rather, the struggle is between more developed systems and something else that is necessarily less developed and that the physicists know as entropy, the second principle of thermodynamics.”

In 2009, English complexity theory economist Antoine Bousquet devoted an entire book to an outline of a "scientific way of warfare", where, of note, in his chapter three entitled "Thermodynamic Warfare and the Science of Energy", he outlined a scientific view of war theory in the context of thermodynamics and complexity theory.

Bousquet considers that the identification of the rules of thermodynamics directly influenced the military doctrines of rapid, dispersed, and unpredictable movement that culminated in WWII with such tactical and operational formulations as the German Blitzkrieg.

Bousquet gives credit to the increasingly recognized ideas of US air force colonel and military strategist John Boyd who deliberately used such scientific theories as the second law of thermodynamics and chaos theory in his military thinking. Using these theories, Boyd for example developed his famous Observe, Orient, Decide, Act (OODA) "loop" which is said to be a very accurate conceptual model for all command and control (C2) systems. [4]

In c.2010, Turkey mechanical engineer Yunus Cengel and American mechanical engineer Michael Boles state that that entropy can be applied to warfare organizations and processes, to the effect that a high entropy army is less powerful than a low-entropy army, namely one that is divided into divisions. The state that the old cliché ‘divide and conquer’ equates thermodynamically to the phrase ‘increase the entropy and conquer’.

Physical intelligence
In 2009, idea of physical intelligence (PI), a thermodynamics upgrade to artificial intelligence (AI), so to speak, was conceived as a two-year research and development project, initiated by Defense Advanced Research Projects Agency (DARPA), of the US Department of Defense, under the direction and conception of program manager Todd Hylton.

The outline of the program is hinged on three independent but connected points: (a) creating a theory (a mathematical thermodynamic formalism) and validating it in natural and engineered systems; (b) building the first human-engineered systems that display physical intelligence [chemical thermodynamic based intelligence] in the form of abiotic, self-organizing electronic and chemical systems; (c) developing analytical tools to support the design and understanding of physically intelligent systems.

Several different teams worked on this project for a period of two-years, the end objective to build PI systems that could be used in the battlefield.